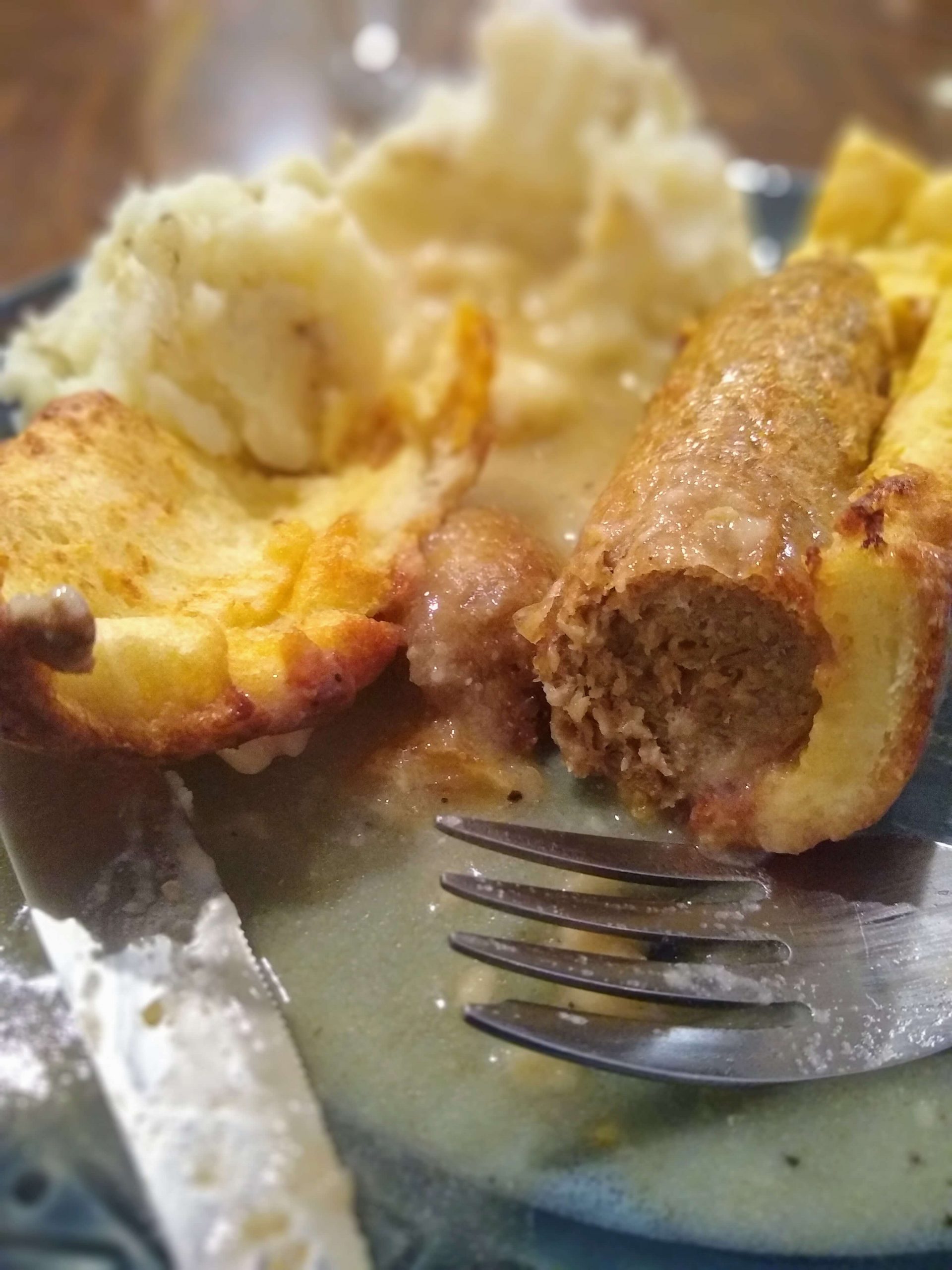 Toad in the hole is my favorite way to use Yorkshire Pudding batter. It’s easy, delicious, and all in all pretty cheap to make (which is always a big bonus :). This may come as a surprise, but I have never actually had a non-vegetarian version… That being said I’ve had a few incredible vegetarian sausages with this dish. Namely, the Quorn sausages, and Beyond Meat’s Italian Sausages if you are in the UK or the USA respectively. (I’m actually not sure if you can get Quorn in the USA nor if you can find Beyond Meat in the UK…) 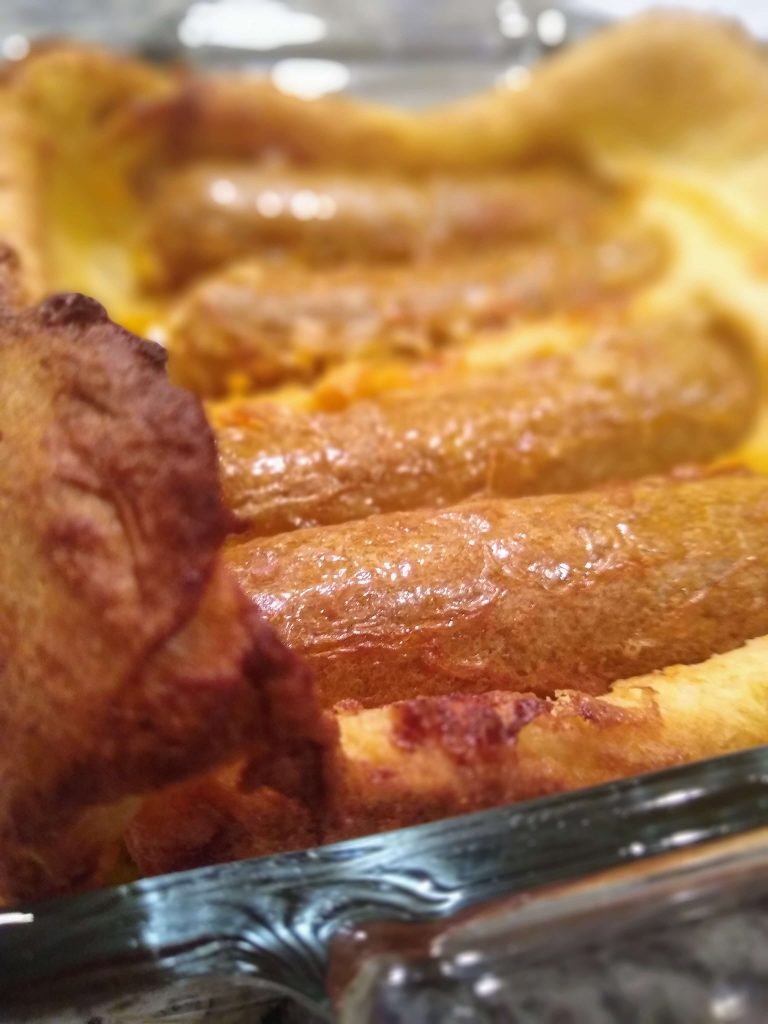 I love this dish. It’s ridiculously easy to make, and it always blew my mind that my English friends would often go out to Sainsbury’s or Tesco’s (UK grocery stores) and buy pre-made ones. Toad in the hole is so simple that it’s only eggs, milk, flour, salt which you mix together. Then baked in a high temperature oven in a pan with sausages cooking in hot beef drippings (beef drippings are traditional I’m told by my English friends).  Super simple, super cheap to make, and super delicious (especially when paired with mashed potatoes, steamed carrots, peas and broccoli).

Anyway, toad in the hole is a truly bizarre dish as an American. Popovers are common, but primarily in the form of German pancakes. I love German pancakes. You bake a simple batter (eggs, milk, flour, sugar – optional, and vanilla or cinnamon as desired) in butter (or oil) in the oven. Then bake it in the oven until is becomes a nice buttery and fluffy pancake.

Though I should clarify. Toad in the hole is one of the many delicious ways to eat Yorkshire puddings. AND I basically covered these similarities in my Yorkshire pudding post. Why repeat? You ask. Well, last night I introduced this dish to my family who had never had Yorkshire pudding nor toad in the hole. (Neither had they ever had vegetarian sausage. I wish I had taken a picture of my youngest brother’s face when he was told that the sausages contained no meat!! 😂 ) For the record, they loved it. At least, they were wolfing down the food until I told them that I tricked them into eating fake meat. So I’ll have to try again with real sausage. 🙂 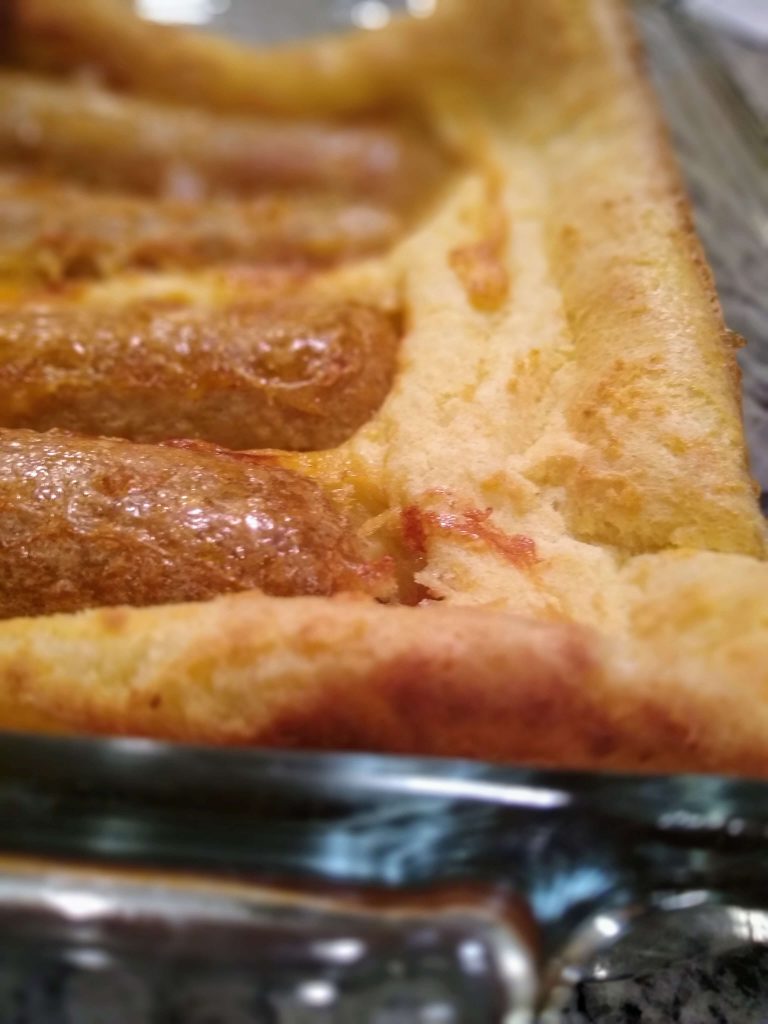 Now that we’re past the recap. Let’s dive into this wonderful dish. I know that if you haven’t already had toad in the hole, you’ll love it as much as me! Disclaimer: I’m not vegetarian and I have never tried this dish with real meat!

Let me know how your toad in the hole turns out! And let me know if you have any questions or comments below!

Toad in the hole

Just as before, it’s really that simple! Remember that when you only have a few ingredients you’ll get a much better flavor if you get better quality ingredients. So, keep this in mind when making your puds!

As making these takes almost no time, begin by preheating the oven to 392ºF (200ºC). We want the puds to rise quickly to give them some size. The high temperature does exactly that. While the oven is heating, choose your favorite 9×13 casserole dish. Then pour your beef drippings into the pan. (I’ve also used butter and avocado oil. You really want a fat that has a high smoke point so that you don’t have a nice smoky surprise in the oven!) You want enough oil that the Yorkshire pudding won’t stick when it cooks.

Once the oil heats up. Remove the dish from the oven, place the sausages inside, and return it to the oven. We went the sausages to brown (which took about 7 minutes for me). So leave them in there (rotate if you’d like crispy sausages all sides) until it happens.

Next, select a bowl. I like to use a bowl with some sort of lip so that I can pour the mixture out later. Anyway, mix the flour and salt together in a bowl. Make a well in the center. Then put the eggs and a little of the milk into the well and whisk the wet ingredients until smooth. Then gradually add the rest of the milk while continuing to mix the batter.

Remove the casserole dish from the oven. Align the sausages into your favorite shape. Then, carefully pour the batter between the sausages. Place the dish back into the oven and cook for 20–25 minutes or until the puds are golden-brown and well-risen.

Remove from the oven and enjoy!

Personally, I think toad in the hole is best with gravy (obviously — I feel like almost all English savory food is swimming with gravy), mashed potatoes, carrots, peas and broccoli. Try it yourself and tell me what you think! 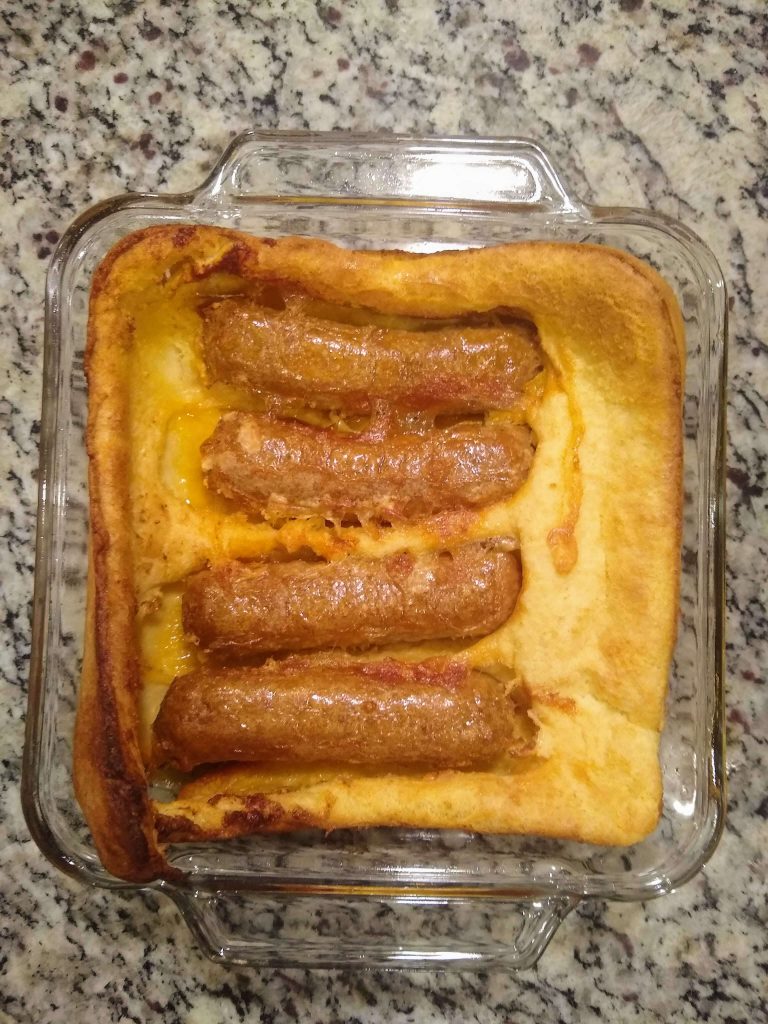 A classic English dish that makes you feel like you're home! This is an easy family-sized toad in the hole recipe for your and your loved ones.