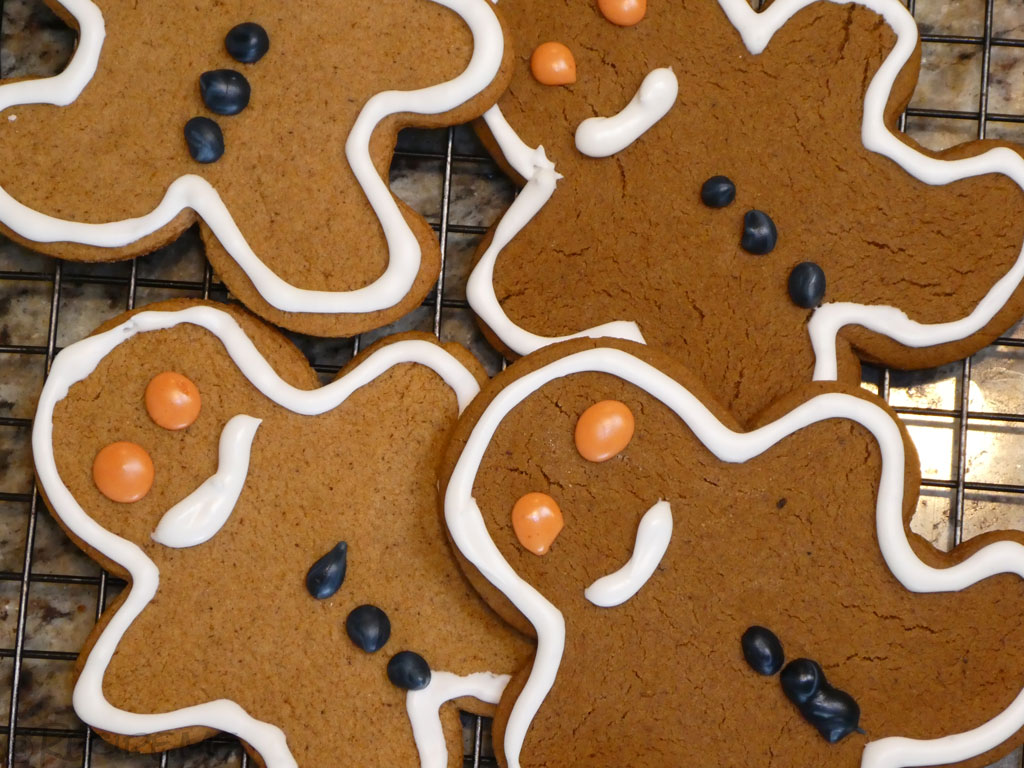 At the beginning of the month, I took out my Christmas decorations and began thinking about what dishes I’d like to make this December. Italian panettone, English wassail, and gingerbread biscuits decorated with royal icing immediately came to mind.

I decided to start with gingerbread. They sound delicious. But here’s the catch, in the UK gingerbread you use golden syrup, and I didn’t have any. In the United States, you make it with molasses instead of the syrup. I don’t usually carry golden syrup or molasses in my house. And I so, I thought… How hard would it be to remove the golden syrup? Ends up it is pretty easy.

30 batches (roughly 300 biscuits) later I realized why the traditional recipe calls for syrup. Have you ever had a cookie that made with margarine instead of butter? Have you had the same cookie made with butter? Did you notice the difference? When I eat desserts like that, I’ve observed that the biscuits with margarine tend to be ‘drier’. By that, I mean that they seem to spread out more (probably because of the higher water content), but hey, correct me if I’m wrong (I’d love to learn more!). Anyway, when using syrup the gingerbread doesn’t ‘dry out’ as quickly. I think the molasses holds in the liquid, but I’m no food scientist! I’ll have to do a bit of research and get back to you 🙂

Until then, enjoy this wonderful recipe!. I know you’ll love it as much as I do!

First, toss the butter bowl and take a hand mixer (unless you placed the butter in a stand mixer’s bowl like I did) and beat the butter. Then cream the egg and honey with the butter.

In a separate bowl, sift together all the dry ingredients. Then, slowly mix the dry ingredients into the wet. I added 100 grams (about 3/4 cup) at a time. The dough will look a lot like bread crumbs at first. But if you keep mixing it, the dough will eventually pull away from the sides of the bowl. When this happens you know you’ve finished mixing the dough for our delicious gingerbread biscuit!

In my attempts to find a good gingerbread biscuit recipe, I noticed a few different things about this particular stage. If you use honey that has a high water content (by that I mean more liquid than solid) then the biscuit dough will very nearly mimic the dough when you use golden syrup or molasses. However, if you use a honey that is very thick (or crystallized – I found a lot of good information about honey here. It definitely explains this concept better than I can!) then the dough will look like breadcrumbs for a long time before you warm the honey enough for the dough to stick together. So, be aware of this when selecting, and using your honey!

Unfortunately, I didn’t take a picture of the breadcrumb stage, but you will immediately recognize it when you see it!

As I’ve said at least four times now, the dough will have a bit of a crumble. So kneading the dough will be a bit strange. So, set the dough on a clean work surface and carefully knead it for a minute or so. Then form it into a disc, wrap it in plastic wrap, and pop it into the refrigerator!

I recommend that you let the dough rest for 12 hours, however, 3 hours will suffice. The flavors seem to merge better when they have twelve hours.

Once the time has passed, turn on the oven to 350ºF (175ºC). Set out a cookie sheet and place on top a piece of baking parchment. Then, remove the dough from the fridge and place it on a lightly floured work surface. I recommend letting the dough warm up. When you can press the dough without having it immediately crumble (about 20 minutes) then you are ready to go!

Roll the dough out until it is 1/4 inch (6 mm) thick. Then grab your favorite cookie cutter (gingerbread men hopefully, at least in this case) and cut away!

Once you’ve cut them out, place them on the baking sheet. When the oven has preheated, place the tray in the oven for 8-10 minutes or until brown. Then promptly remove the cookies and let them cool for 10 minutes on the sheet before transferring them to a cooling rack.

Now time to decorate it with a nice royal icing!

I ran out of food coloring, so I drove to the store to buy some. There, I happened upon some organic food coloring. Intrigued, I tried it out. With the frothy egg white bubbles, I felt like a mad scientist. I added the red and blue (in separate containers) and began mixing. Surprise ran through me as I realized that the red was orange, and I’m still not sure what color the blue turned out to be! So, here’s a note for you and me for when we next use organic food coloring. Make sure the red food coloring doesn’t use turmeric! (Turmeric dyes everything orange.) Beet juice + turmeric makes red become orange.

Instead of boring you with a repeated recipe, check it out here!

Now decorate those biscuits and enjoy!

Merry Christmas to all!

A golden syrup-free variation of the classic gingerbread biscuit.

If you liked this, then you will love these!