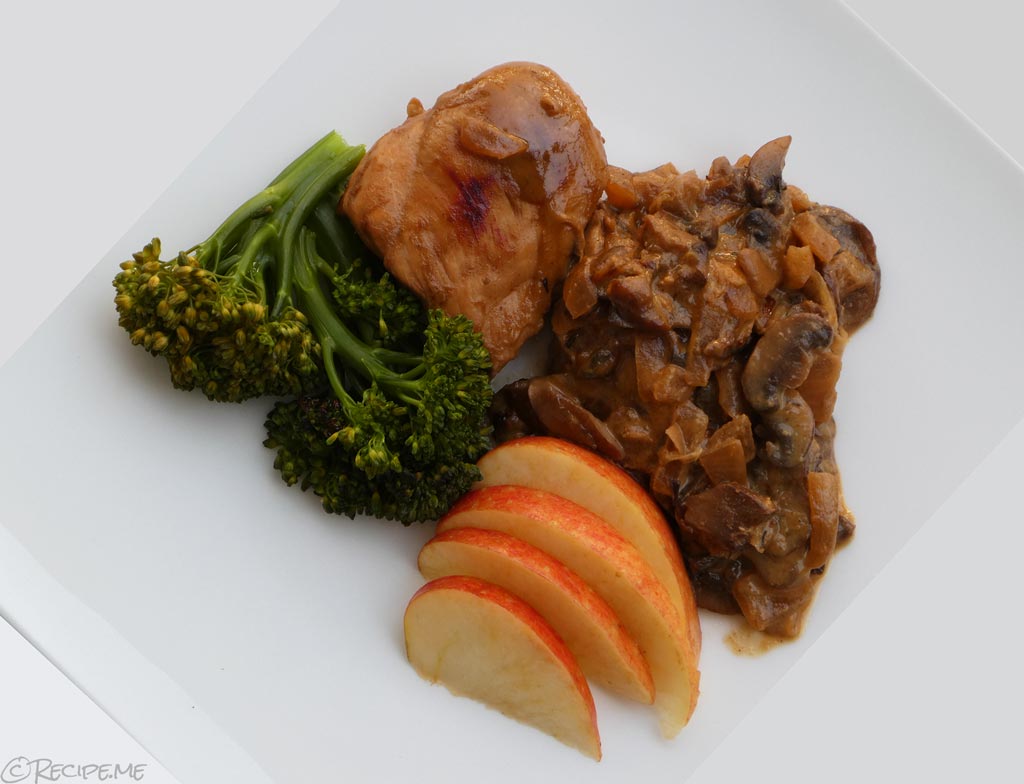 Poulet Vallée d’Auge (French chicken with apples) is the official chicken dish of Normandy. Its creamy sauce keeps the chicken moist during the entire cooking process. The flavor speaks of an old-timer dish (that is, a dish that takes a long time to make – something that we Millenials usually avoid due to a world of instantaneity). Truth be told, I know you’ll love this dish because of the rich flavors.

Poulet Vallée d’Auge (French chicken with apples) is a simple dish that can be eaten with potatoes, apples, rice, or lettuce leaves. The ways that you can eat this are practically numberless (though, I would not recommend blending it. That just sounds disgusting. Forgive my opinion on how chicken should/should not be eaten). French chicken dishes have a conglomeration of flavors that give the chef a lot of leeway on how to serve the dishes. In fact, I enjoyed the last chicken dish (Poulet à la Moutarde) so much, that I decided to make another one! And so here we are with another one!

Yesterday, once I decided that I wanted to make this deliciously creamy chicken, I looked outside and saw a ton of clouds gathering. And I thought, “Well looks like I will have to prepare for another snowstorm.” It’s been snowing ever since, twelve hours of snowfall. We easily have a foot of snow on the ground. So far this year, we’ve only had one or two small snowstorms. Nothing compared to what is outside my window right now! Today is a holiday, and I can hardly wait to eat my leftovers of this dish once I get back from a day in the snow!

Let’s jump right into how to make Poulet Vallée d’Auge (French chicken with apples)! I’m planning on building a snowman (and possibly a snow angel) while the snow is still fresh, so let’s get cracking!

Poulet Vallée d’Auge remains one of the easiest chicken dishes to make (that I can think of)! The process is remarkably easy and doesn’t take too long. You might start considering poulet vallée d’Auge as your ‘go-to’ chicken recipe!

Let’s run over to our refrigerator and pantry and grab the following list of ingredients:

Now we begin! The first step in preparing your very first poulet vallée d’Auge lies with the chicken. Place a large pot on a high-heat stovetop. Once the pot begins to warm add the oil and 1/2 of the butter. (We’ll save the rest of the butter for another step!) When the oil and butter are hot, remove the chicken from its packaging and place the chicken and onions in the pot. Stir carefully until the chicken has browned and the onions have become translucent. Then, add 400 milliliters (about 14 ounces) of apple juice (or soft apple cider – soft apple cider is a non-alcoholic cider). Bring the temperature of the chicken and juice up to a gentle boil.

In a pan (completely separate from the pot), heat the oil until it begins to sizzle. Then toss in the thyme, bay leaf, and the mushrooms. Cook them until they become soft. You don’t have to chop the mushrooms. The main disadvantages to chopping them are that you lose the mushrooms’ form and the liquid releases better when heated.

After that last 10 minute simmer, remove the chicken and mushrooms. Set them aside. In a small bowl, mix the egg yolk, flour, and the remaining 100 milliliters (3 ounces) of the apple juice. Then toss the flour mixture into the chicken/mushroom juices in the pot. Stir until a roux begins to form. Then add a 100 milliliters (½ cup) of the crème fraîche at a time. Once all of the crème fraîche has been incorporated allow it to simmer for 10 minutes. And now, add the chicken and mushrooms back to the pot and simmer for 10 minutes or until the sauce has reached the desired consistency.

This dish is often served with apples or potatoes.

I was chatting with SuzyCooking about this dish and after a few experiments, we made a cool discovery! If you don’t have crème fraîche then try substituting kefir. First, strain the kefir until it begins to thicken. Then use it just as I direct in the recipe above! Hey, check out my friend SuzyCooking’s Facebook or Instagram page. (Follow her too, she’ll teach you how to make crazy good food!) She makes super healthy food, that tastes good. A friend (who at the time was on the Caveman diet) once told me, “You know it’s healthy when it doesn’t taste good.” Well buddy, if you ever read this I can say you’re wrong there!

Once again, let me know what you think! I love this dish and I think you will too!

Poulet Vallée d’Auge (Creamy French Chicken with Apples) is a French classic from Normandy! The first bite teaches you that apples can be used in ways more exotic than desserts and sweets. Within moments of that first bite, your taste buds will be visiting the white-chalk cliffs made famous by D-Day.